The Chartered Financial Analyst® Exam is notoriously challenging. Candidates all over the world take the exam on the same day, in either June or December, depending on the level. (Only Level I is offered in both months, Level II and Level III are only offered once a year in June).

Due to the large amount of material covered on the exams, the CFA® Institute suggests that candidates begin to prepare for each level of the exam at least 6 months in advance, and recommends approximately 300 study hours per level.

In recent years, pass rates for the first two levels are well below 50%. The 10-year weighted average CFA® exam pass rate for Level I is 38%, for Level II it is 43%, and for Level III it is 54%. It takes the average candidate 4 years to pass all three levels of the exam and obtain the credential. This is clearly not an exam that should be taken lightly. A solid program of preparation is absolutely essential.

The percentage of candidates who pass the Level II exam is only marginally higher. In 2016, only 46% of exam-takers passed Level II.

Those who do not pass are required to retake the exam the following June. Candidates may take the exam as many times as they need to pass.

By the time candidates take the Level III exam, their odds of passing the CFA® are greater, and the percentage of those who pass appears to be rising. In 2016, 54% candidates passed the Level III exam, as compared to 53% who passed in 2015. That’s why it’s imperative to find the right CFA® course for your needs, so that you can develop consistent, efficient study habits to beat the odds. The Level III exam appears to have become more rigorous over time, given that pass rates from the 1960s through the mid 1990s typically ranged between 70-96 percent, with only a few exceptions (see the CFA® Institute statistics here).

The CFA® exam is held in more than 180 cities in June, and more than 60 cities in December. The Asia Pacific region accounts for about 42% of the total registrations, followed by 36% in the Americas. The remaining 22% come from Europe, the Middle East, and Africa.

The CFA® continues to be the preferred certification exam of financial professionals worldwide. Even though pass rates are low, the popularity of this course is on the rise, presumably because investment banks and financial institutions increasingly recognize the value CFA® charter holders bring to their organizations.

Overcome the odds and ensure your success on the exam through a solid CFA® review course!

START STUDYING FOR THE CFA® EXAM 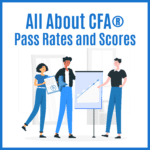 All About CFA® Pass Rates and S...

Top 3 Reasons To Become a CFA®

What Are the Differences Between the CFA...

How Much Does it Cost to Get a CFA®

How to Pass CFA® Level 1 Exam

Which Jobs are Open to CFA® Candidates?

How to Pass CFA® Level 3 Exam